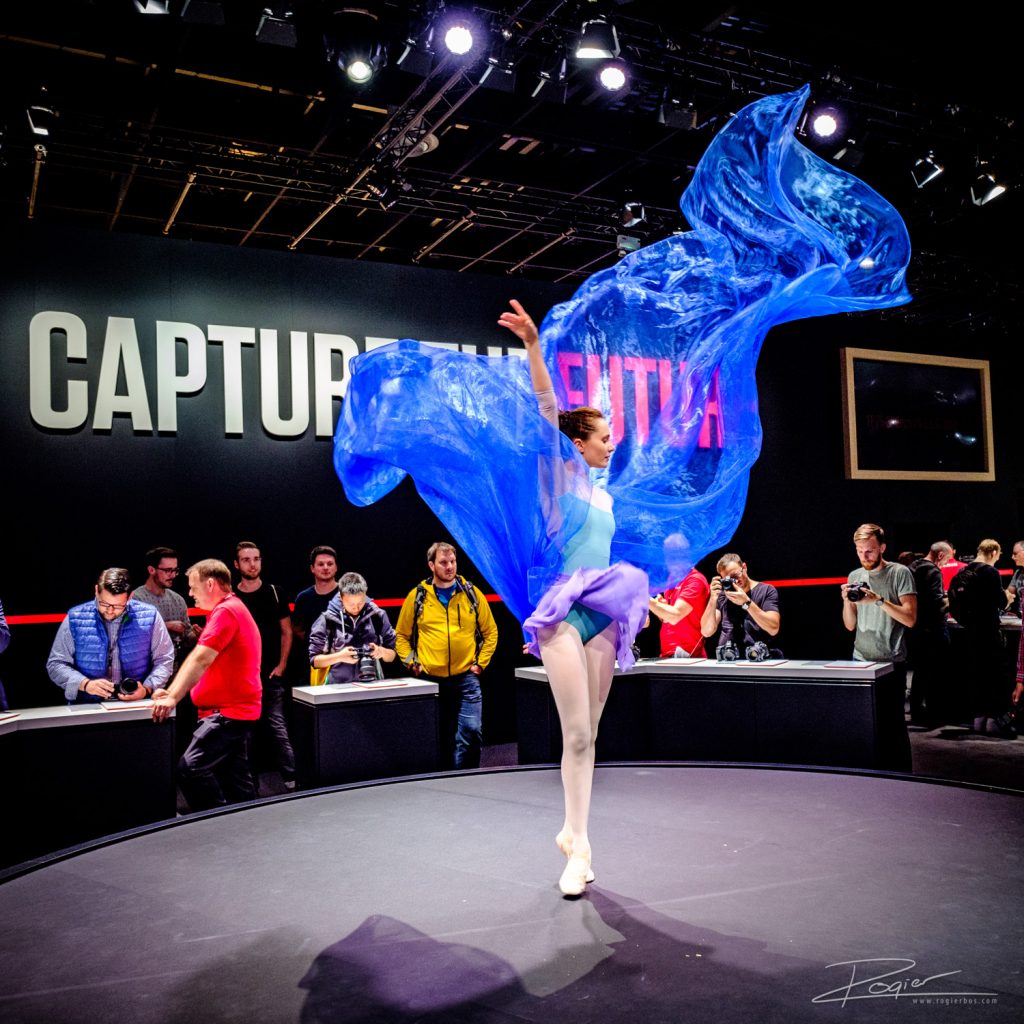 In this post a number of observations and experiences, as well lots of photo’s. In showing them to you, I hope to give you a bit of an insider’s view of my world. For professional photographer’s who could not go, I hope my blogpost gives you an impression anyway. Disclaimer: the following are my thoughts and no one else’s. I may be totally mistaken or misinformed. 🙂

A couple of surprises

Let me start by listing a couple of things that surprised me as soon as I arrived.

Enough of the griping, on with some of what I saw!

The photographic industry is always changing. The biggest development in recent years is the arrival of professional photo camera’s without the internal mirror. This year my brand, Nikon, and Canon (the biggest player on the market) came out with professional mirrorless camera’s. I should say ‘finally’, because Fujifilm has been making them for a while now. I invested in Fujifilm camera’s three years ago, and have enjoyed them very much. So while Canon and Nikon have finally got their first mirrorless camera’s out, Fuji brought out the third release of its professional mirrorless camera, the X-T3, and the second edition of the medium format camera. The feeling with many people I spoke to regarding  Nikon and Canon’s mirrorless camera’s was ’too little, too late’, or as the Dutch say: it’s like bring out the mustard, long after the meal is over.

I’m quite excited by what Fujifilm is producing, and so were lots of other people. The Fujifilm stand was heaving with people! 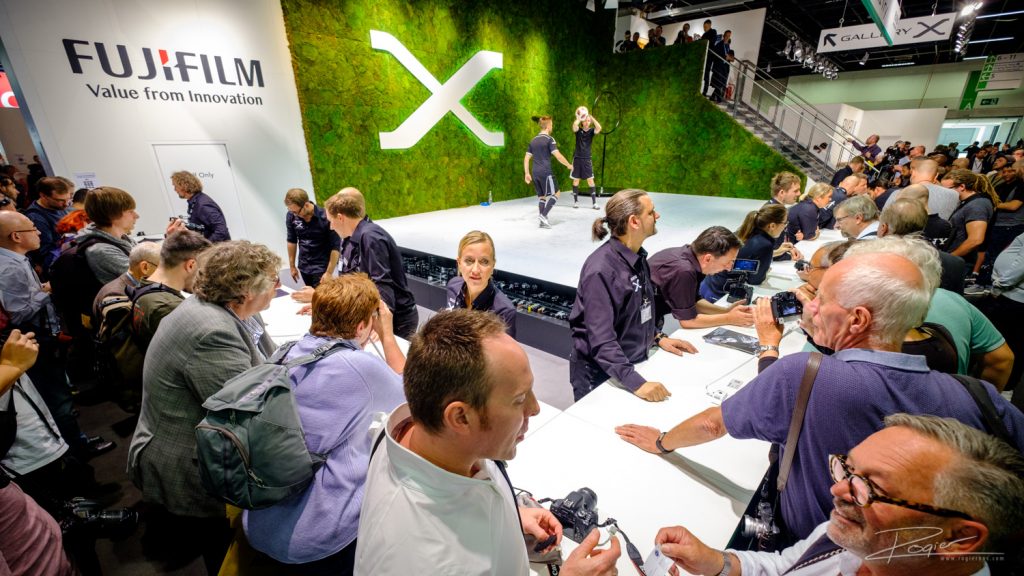 I go to Photokina looking for the new developments. Every year there are lots — but not everything is useful to me. But one company I have become enamoured with is SMDV. This is a small Korean company that is making nice, affordable flash equipment. Every time I visit Photokina I see cheap chinese imitations of things European and American companies presented two years ago — but SMDV is making some really interesting new stuff. This year, their parabolic lightshapers were new (see my photo below). A lightshaper fits on your flash light, and shapes your light. Well shaped light makes a great difference in your photo. I’m pretty sure one of these light shapers is going to end up in my studio in the next few months! 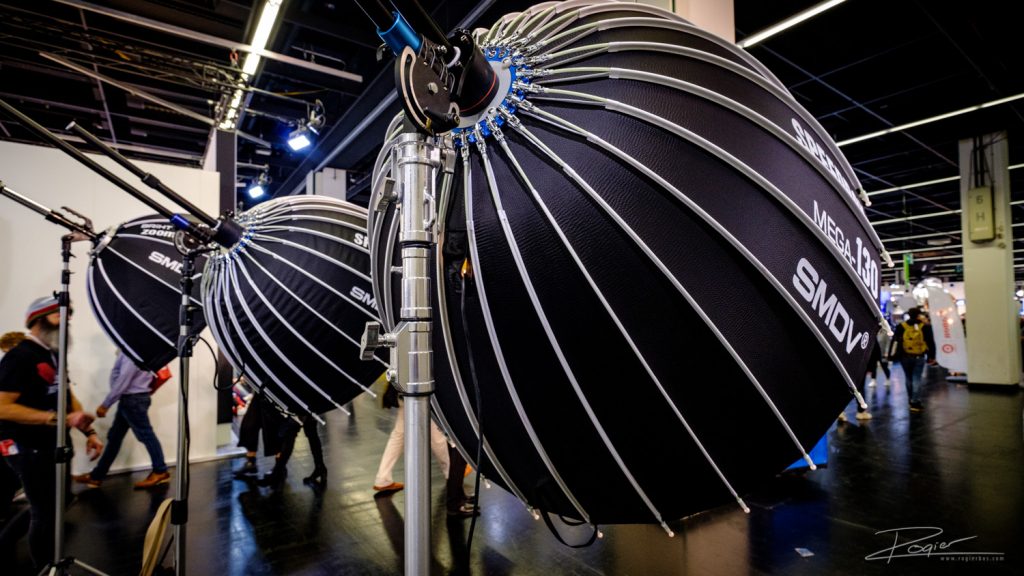 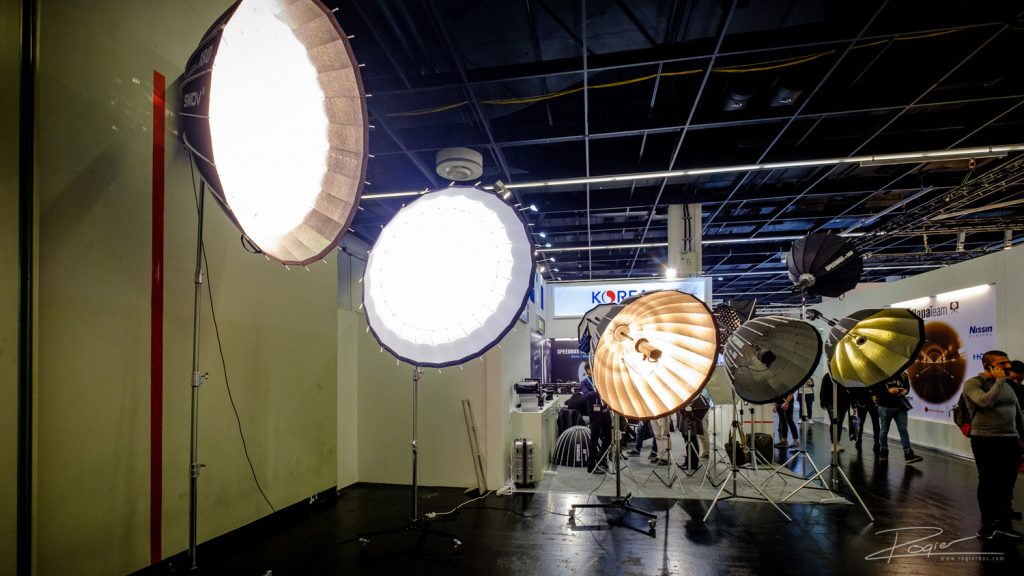 Should I go looking for another job?

My industry is always changing. The arrival of the digital camera, and then the dawn on the internet, have thoroughly impacted the world of professional photography. So much so, that people regularly tell me my job is coming to an end. I never believe that ( I think people will always need good images), but I must admit that I was a bit surprised that Nikon had brought two robots who could photograph. Maybe my job will not be to make images, as much as it will be to rent you my photo-taking robots. I guess that would make me a rental company…? 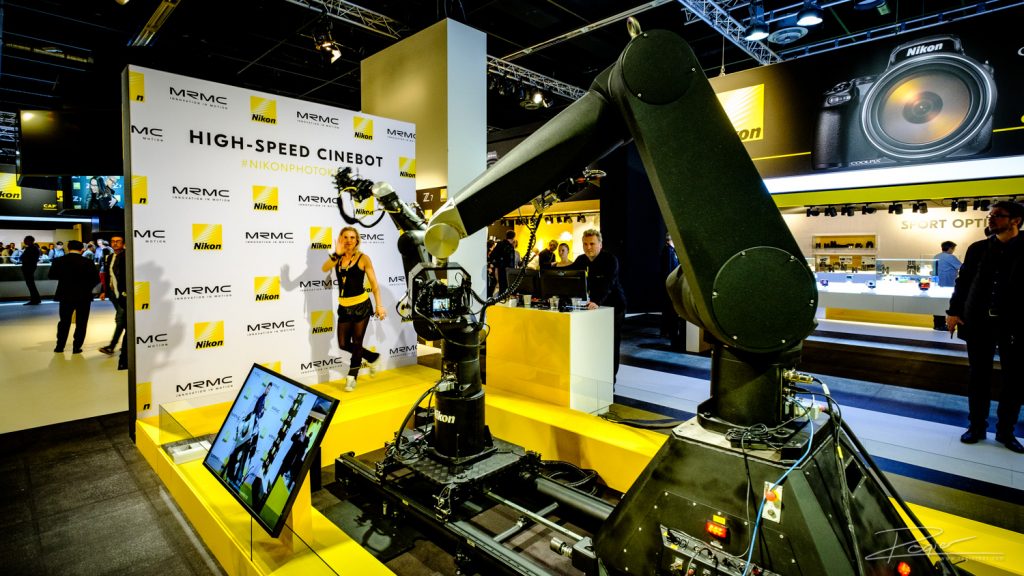 When you go to Photokina, you know you are going to see lots and lots of photo’s. Bt this year it seemed a little crazy, and I am not sure it was very helpful. Fujifilm (yes, the company I just raved about) had committed to showcasing 12 million photo’s at different venues around the world. And one of the venues they choose was Photokina. Now, mind you, these weren’t great photo’s. Many of them were just snaps. But one of there slogans is ‘every photo deserves to be printed’. Here are some photo’s of the endless photo arrays. And in case you observe it seems hardly any one is really looking at them — that struck me too! 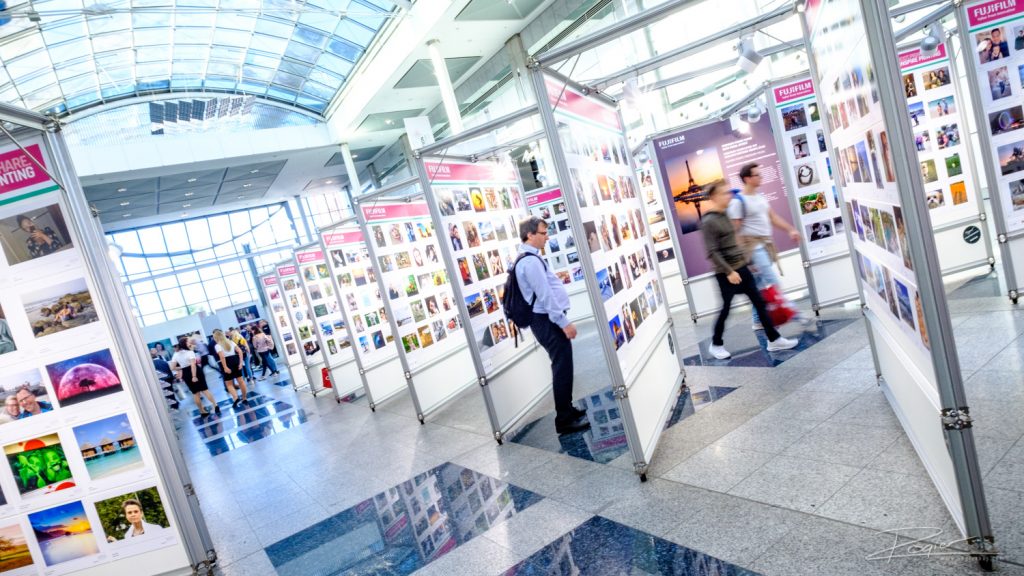 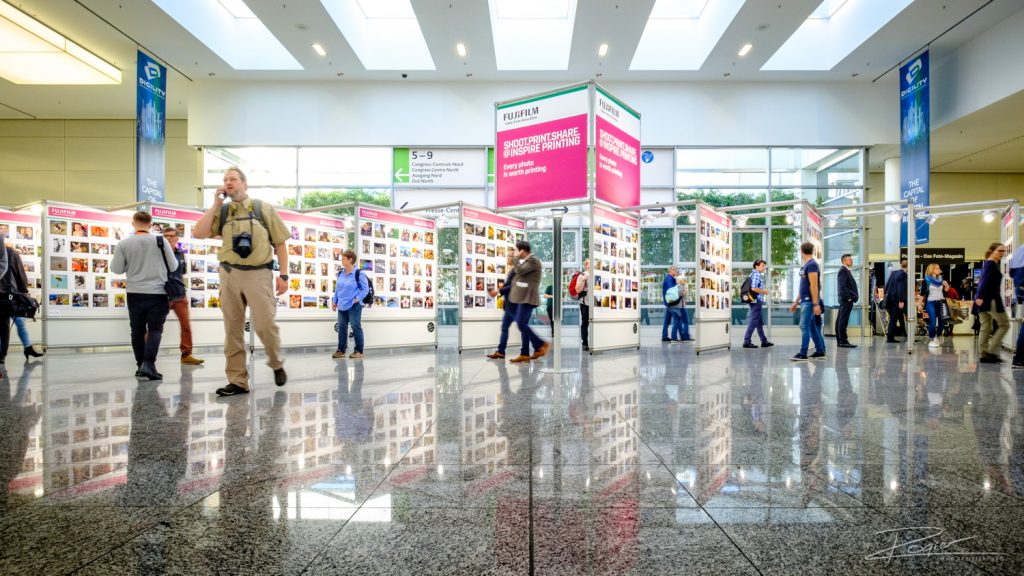 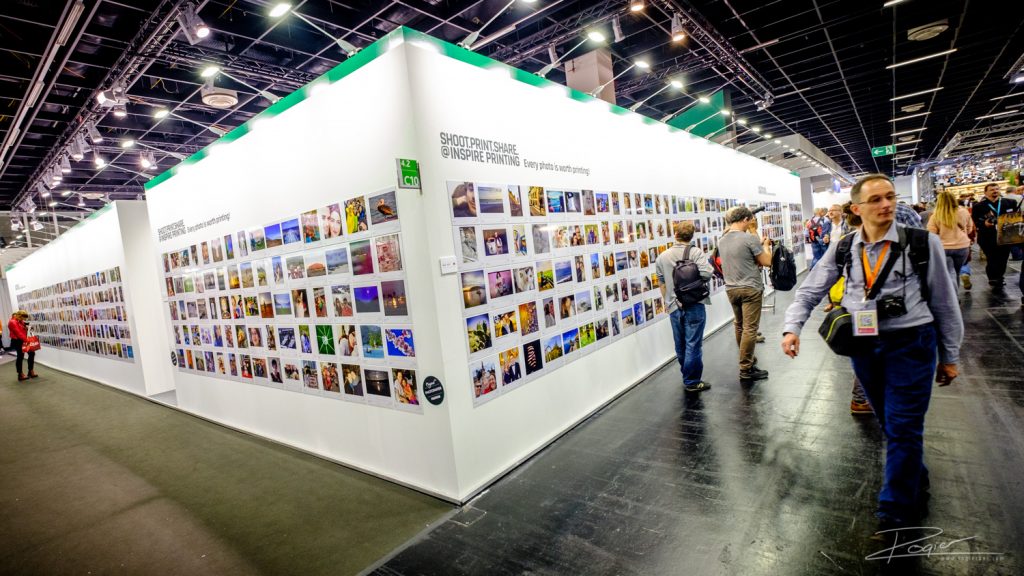 Speaking of images, I was disappointed Leica did not put up it’s huge portrait exhibitions like they did in previous editions of Photokina. Instead, Minolta got to use that whole hall for a colour full photo-occassion. Fun, but not the same! 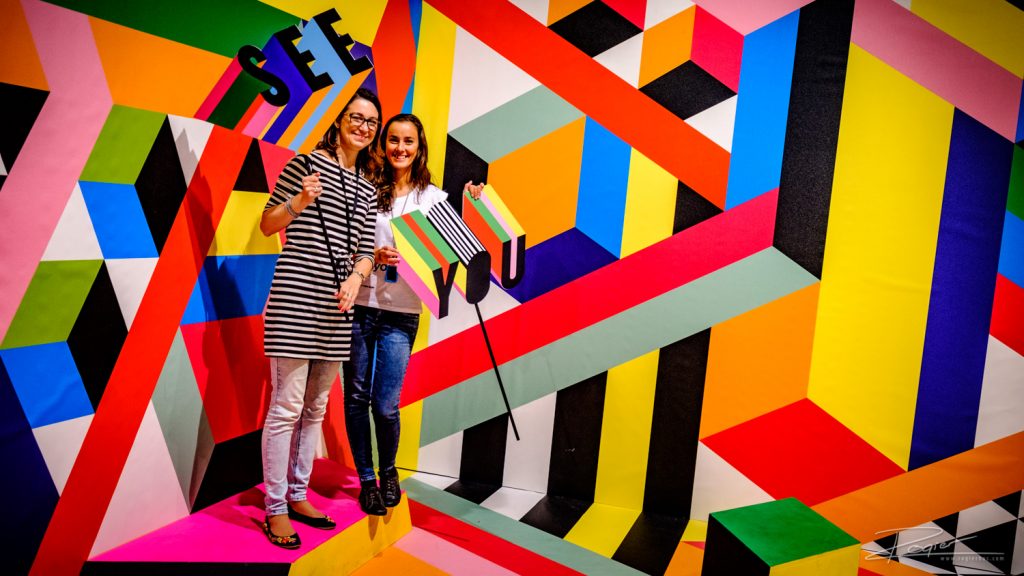 Every photokina camera companies bring out models and displays to attract your attention and help you test their latest camera’s and equipment. You could go to Photokina just to see that. Here are some strange creatures I came across. 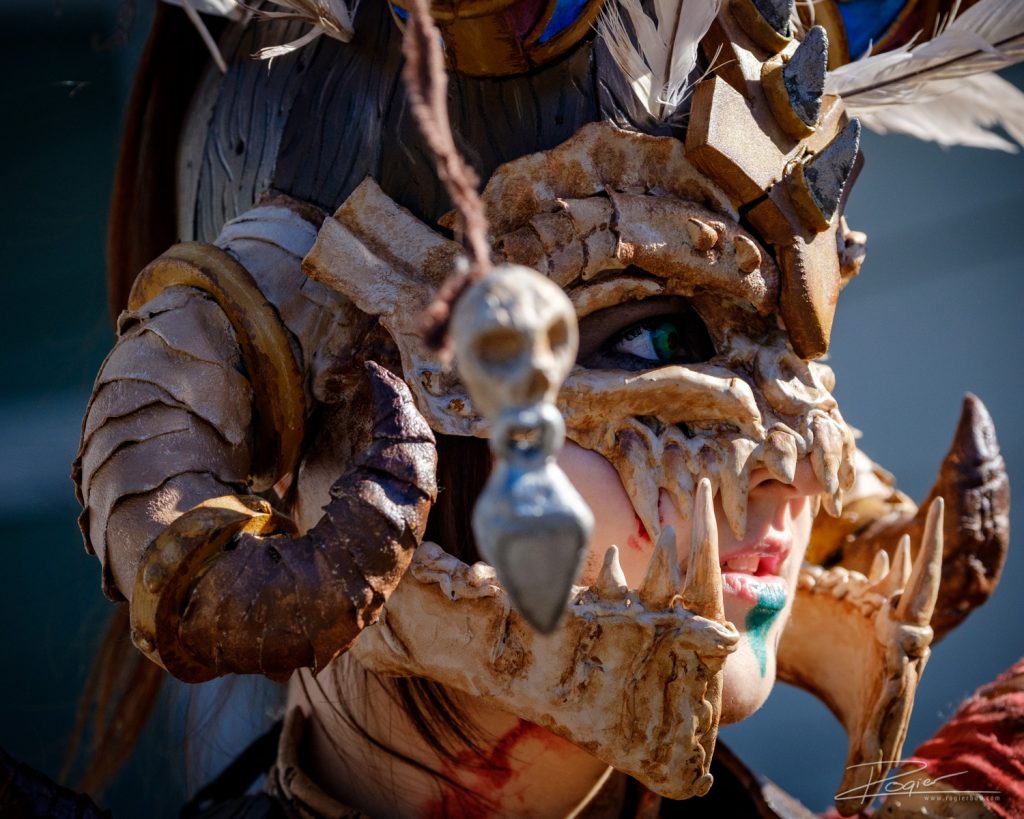 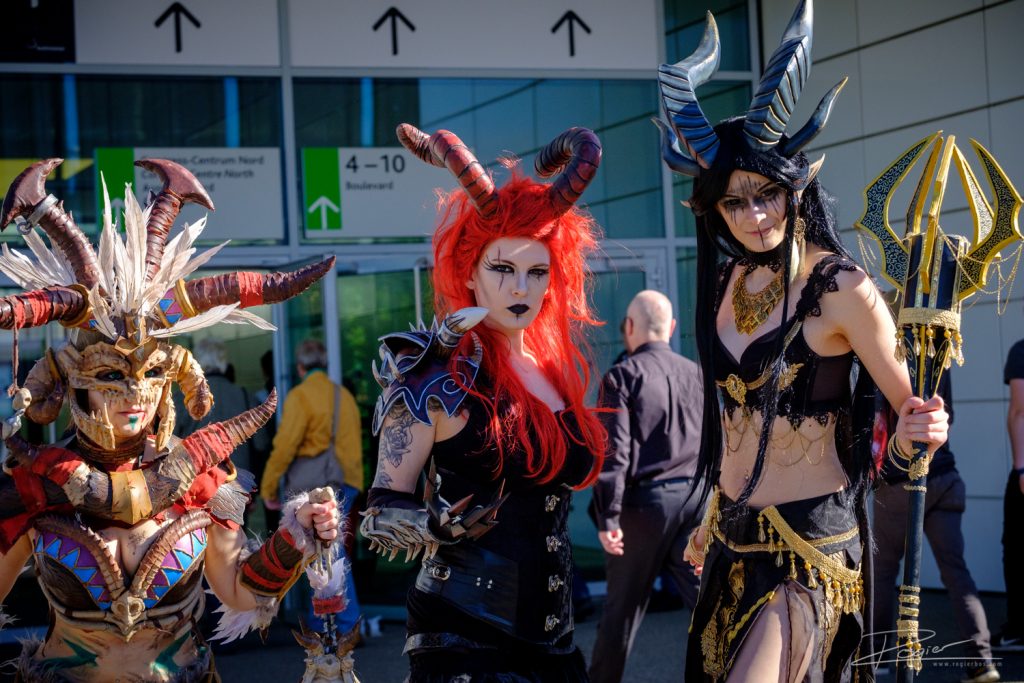 Actually, my award for the best display goes to Canon. They had a ballet dancer dancing with a peace of cloth that was perpetually moved by a windstage below. I thought it was magical. For that reason, they get the space at the top and the bottom of my blog, even though Canon is not my brand.

Interesting side note though: the Canon host said the display would demonstrate that Canon has the fastest autofocus system. I actually thought Sony’s professional camera’s are faster. And when a Canon rep handed me the Canon camera, and I asked her the question, she whispered the Nikon was faster as well. Which I thought was an interesting little vignette into this industry: all the major companies have new camera’s and say their’s are better then the competition, but it all depends on how you look at it! 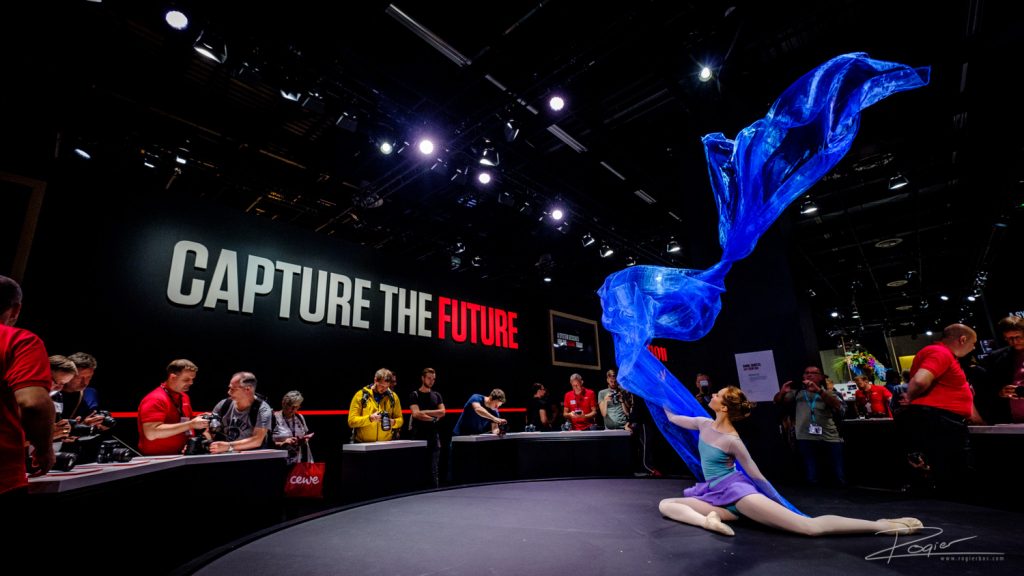