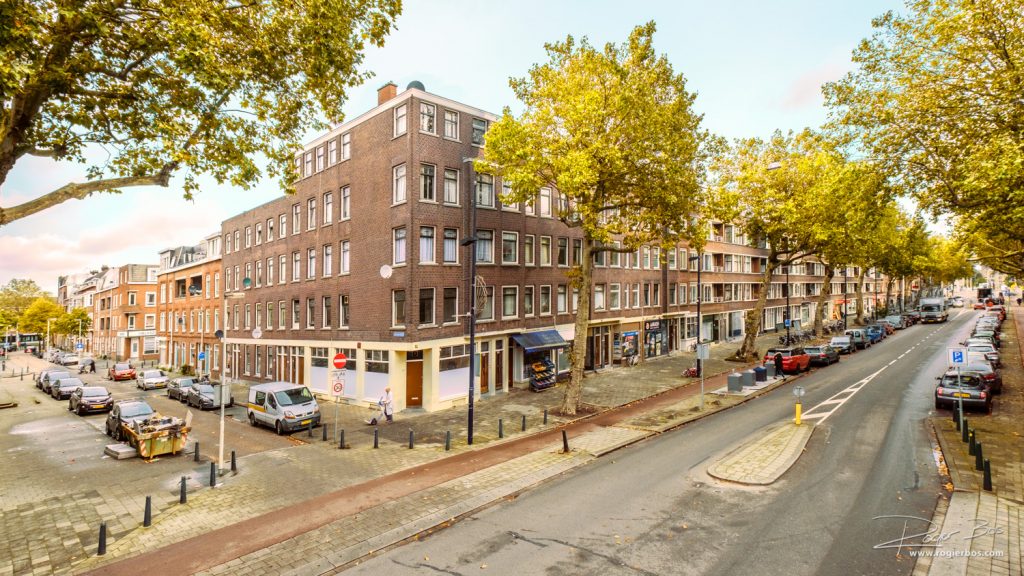 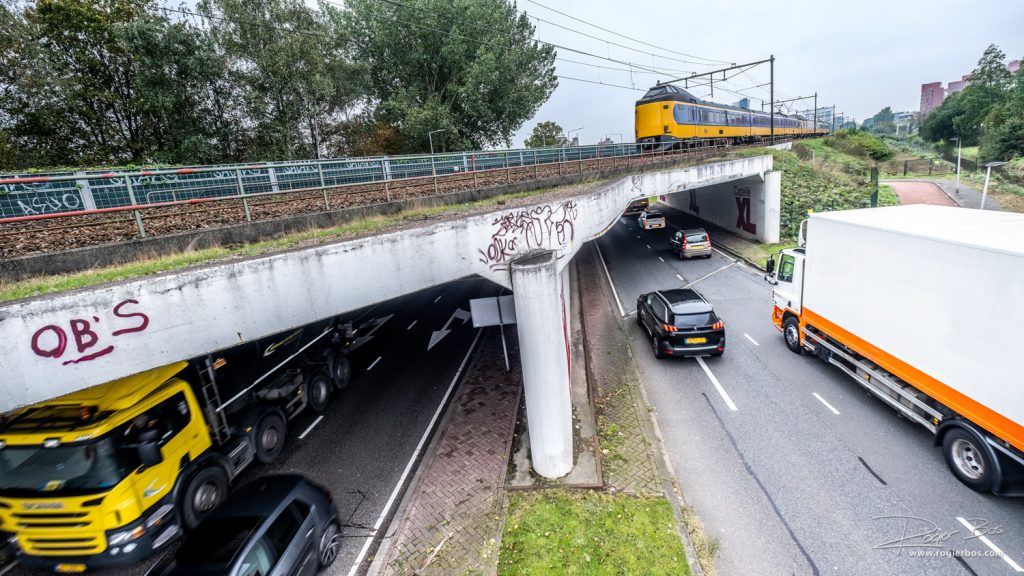 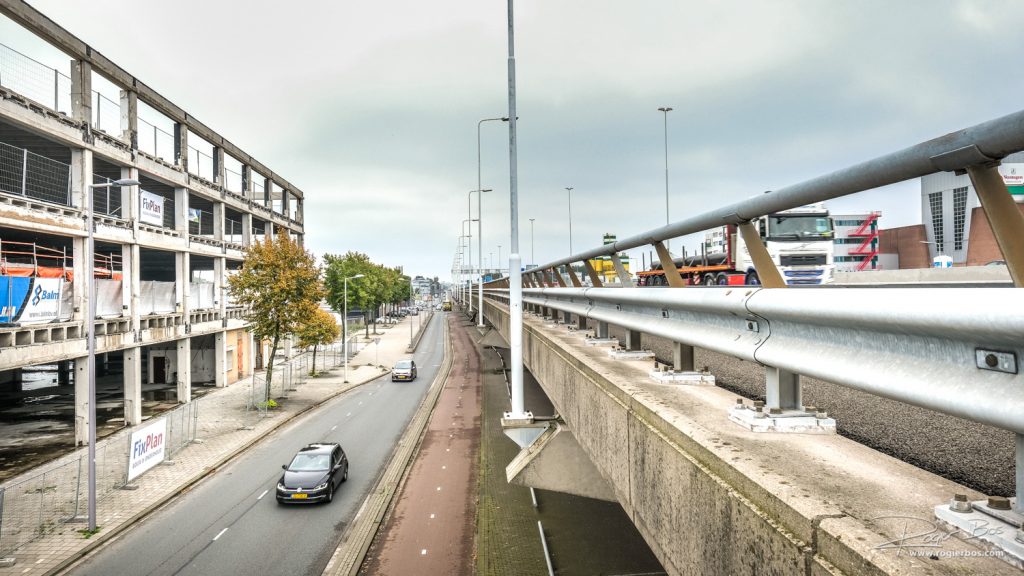 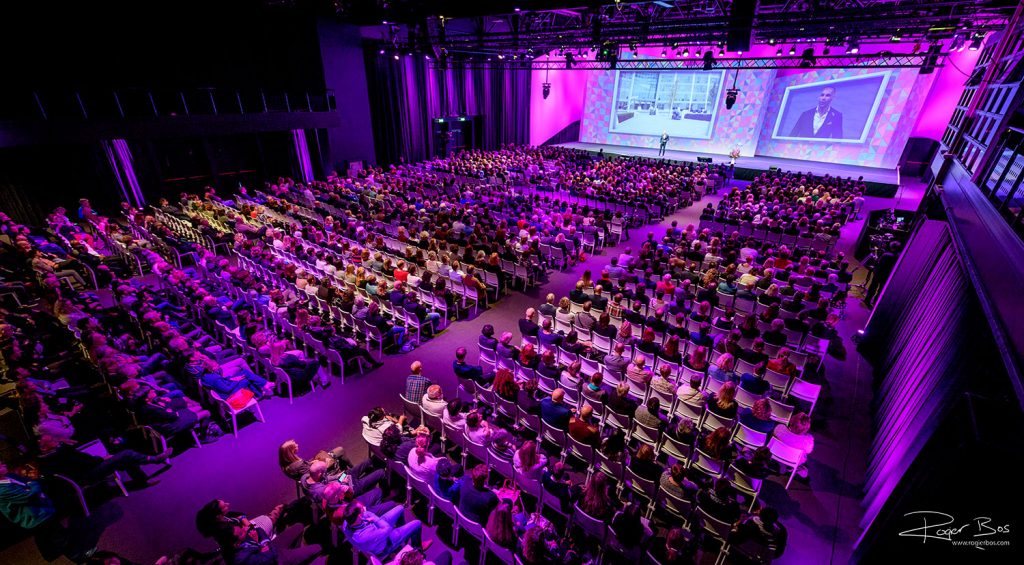 One of the Isle of Skye’s most well know — and most photographed — landmarks, is the Old Man of Storr. It is a collection of rock pinnacles that sit on a mountain side in a wide-open landscape. It’s a stunning location to visit and photograph, even if the weather doesn’t really cooperate.

My previous post contained a number of beautiful Isle of Skye landscapes. I kept my images from Old man of Storr out, because thas place merits a post of its own. Out walk up the Old Man was my favourite during our holidays.

You can click on any of the images to see them larger.

The hike starts right by the road. from Portree it takes half an hour to get there — if you can force yourself to just keep driving and not take in the landscape every three minutes or so.

There is a car park there, but I suggest you come early. Because once the car park fills up (and it will). there is really no place to park for a long while.

The hike starts nice and slow. The path climbs gently and evenly, till about a third of the way. Your total climb today will be around 500 meters, if you want to be level with Old Man, or higher if you want to look at him (her?) from slightly above. A pair of solid hiking shoes are essential; the path is rocky and muddy, Admire the flowers as you go along! 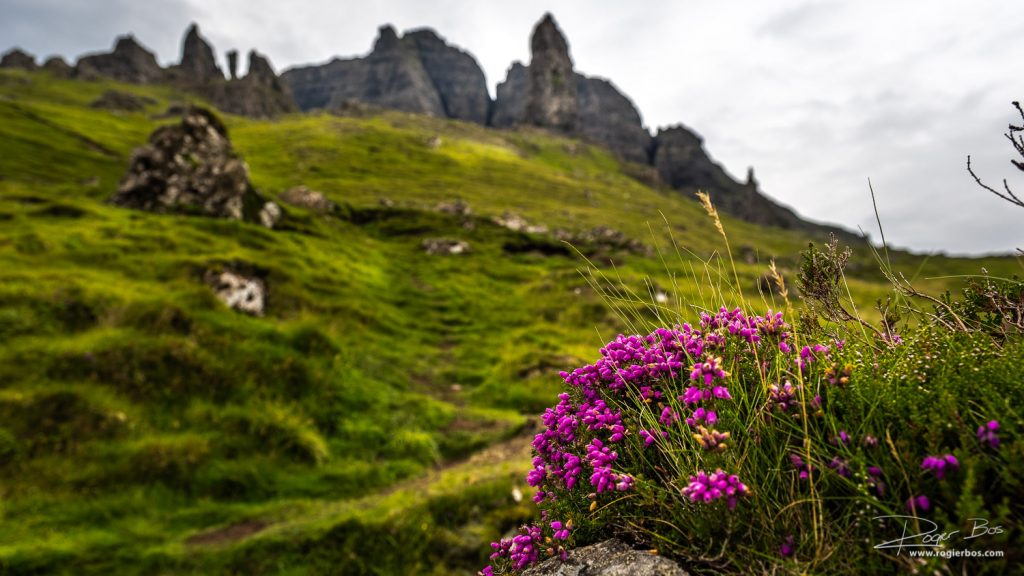 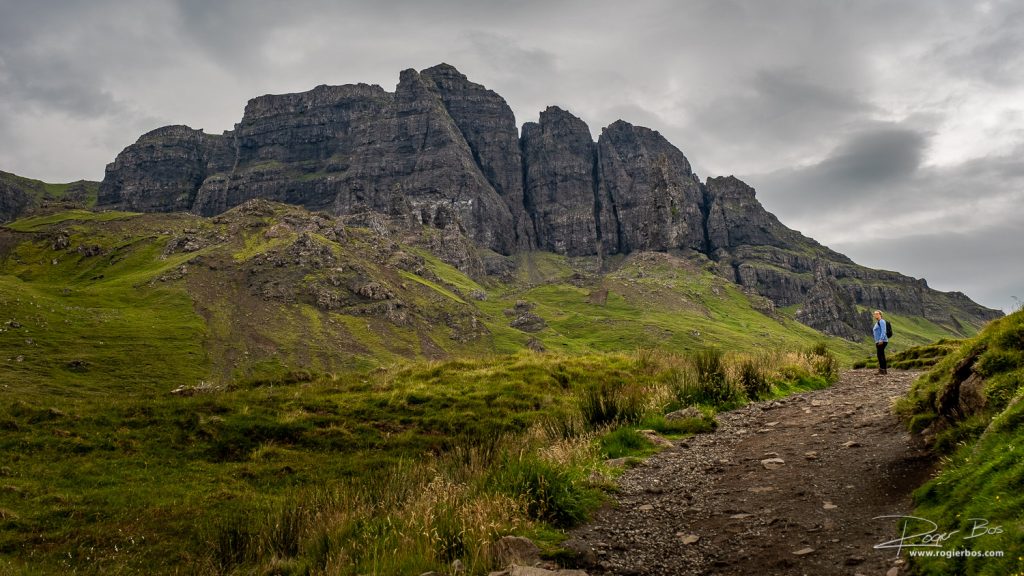 Sophie and I sought to be beat the crowds and so we made sure we were there by 7:30. There were a few people, but on the whole it was pretty quiet. We walked alone most of the time. I carry a camera bag with a couple of lenses, so we’re not the fastest. I was interested to see that a number of other people with tripods and camera’s also came early and sped up the mountain: they were all oriental in appearance, young, and obviously much fitter than us. They overtook us, and a little while later we were ‘entertained’ by the sight and sound of a drone. I wonder in what video we will be appearing…. 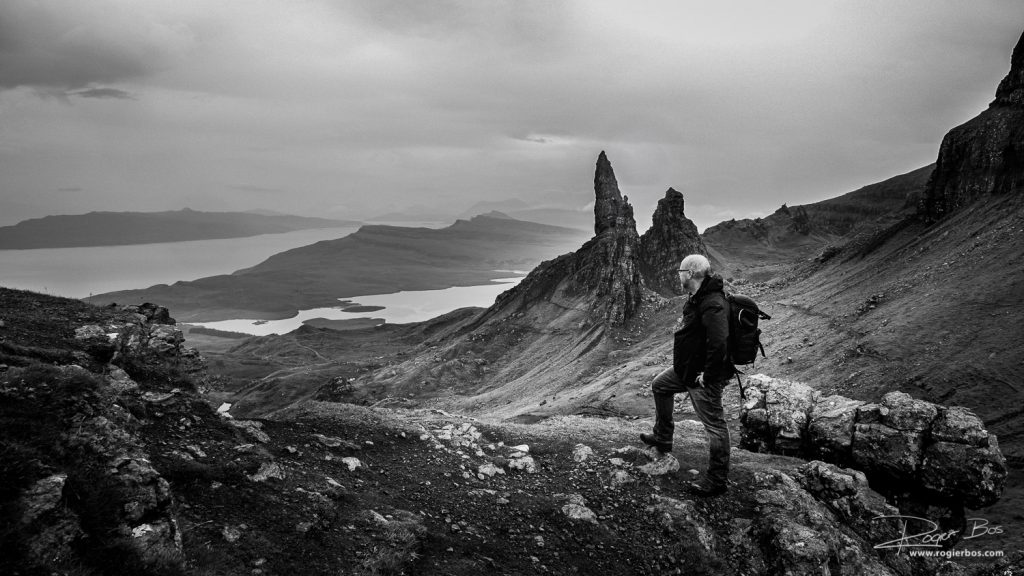 By the time we reached the rock pinnacles there was a cold wind and it had started raining. We brought rain jackets, but even with those it was pretty cold. Up there the wind has free reign. 500 meters can make quite a difference..

But it is, in a word, beautiful. I am not sure I can explain it. There is a quiet peacefulness to the landscape. A depth that comes from having been here long before we got here, and from being here long after we will be gone. And it’s all around, and goes on for miles and miles and miles. There is no way to do it justice with a photo. 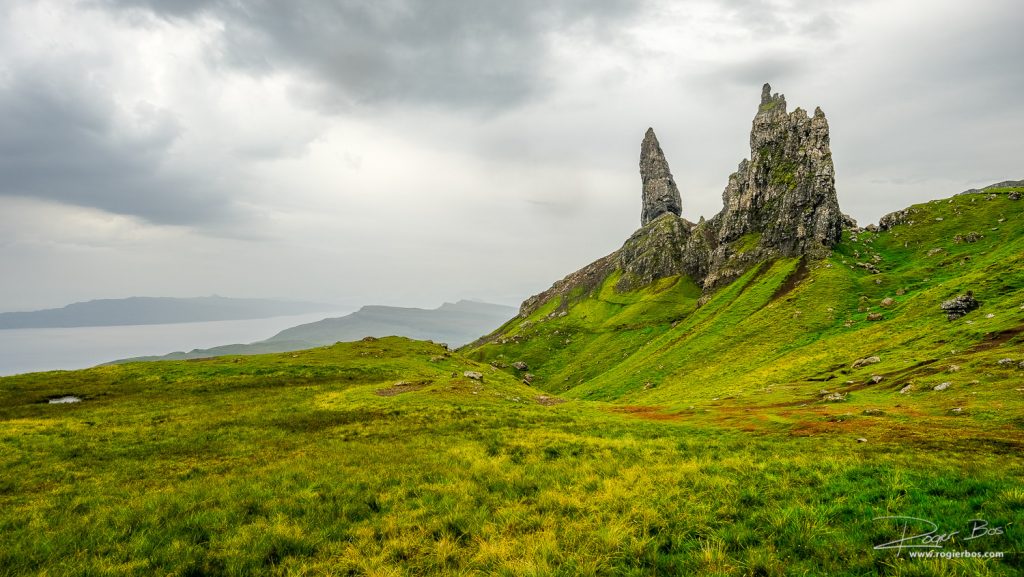 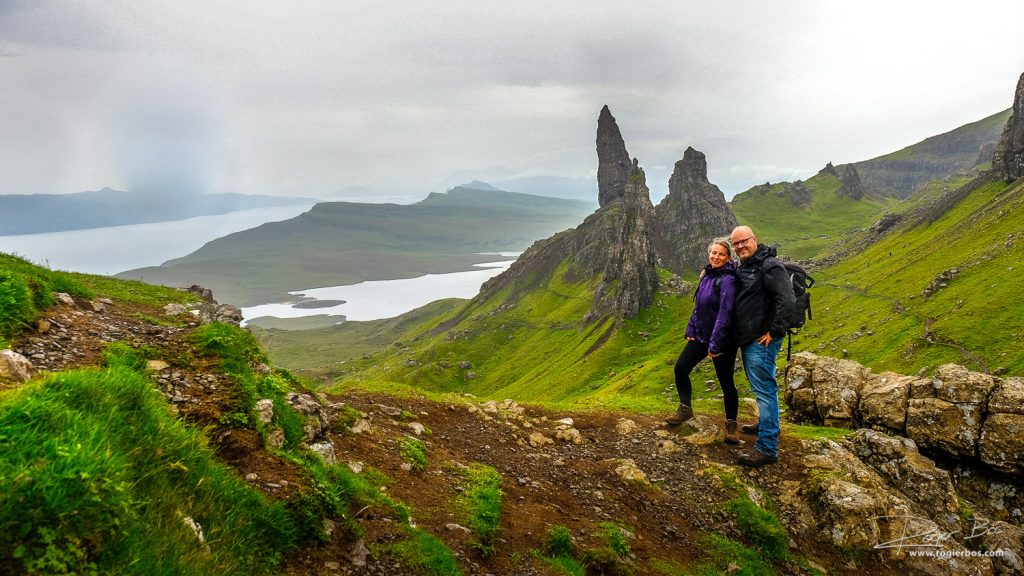 The walk down was just as long and beautiful and difficult as the way up. By now the rocks had become very slippery, and so we walked slowly and carefully.

We came across a sign which I experienced as terribly confusing… was I supposed to go on, or not? 🙂 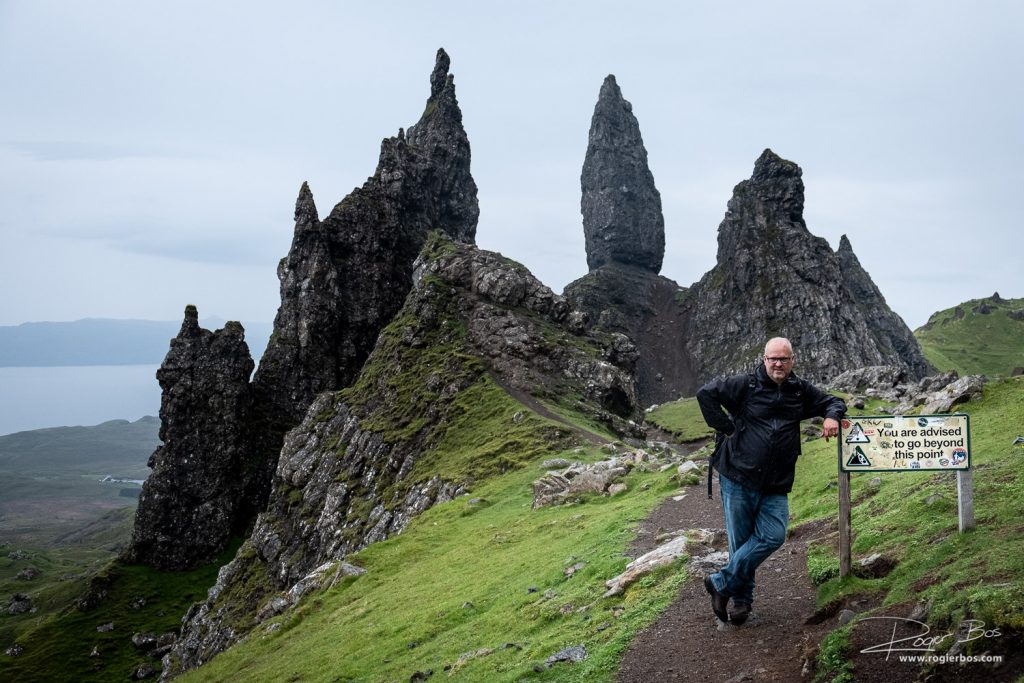 Really there’s two ways up and down Old Man. On the way down we choose the longer way. At some point it opens up and this is the landscape before you. This is three photo’s stitched together. It covers about 180-degrees.

Time for my fourth blog with pictures from our recent vacation. Sophie and I spent a week on the Isle of Skye. I was told it was beautiful, but it certainly surpassed my expectations! It blew me away! What an incredibly peaceful, grand, open and gentle place the Isle of Skye is. I don’t think my pictures do it justice!

We stayed in three different AirBnB’s; in Uig, Fiskavaig and Elgol. One famous place on the Isle of Skye which is missing in this collection is the Faitypools. We did visit them, but it was raining too hard to take any decent photo’s. We also climbed Old man of Storr; those pictures will be in my next post. All photo’s made with Fujifilm X-T3.

You can click on the pictures to see them larger.

Our first stop in Scotland after leaving the Lake District (see my previous post) was Fort Williams. I wanted to show Sophie Scotland, because even though she is British, she had never been there. But for me it had also been almost 30 years, so where to go? Fort Williams itself is a bit of a dive (though I recommend the restaurant “Garrison West”!). It sits at the foot of Ben Nevis, the highest mountain in the UK, but the mountain was constantly covered in clouds, so going up did not appeal to us.

The other thing to do is to visit the viaduct at Glenfinnan, and that’s what we decided to do. There is a Steam Train that crosses this viaduct four times a day. The viaduct and steam train were used in the Harry Potter movies. I was never really in to Harry Potter, but that scene is somewhat iconic. And growing up I was into steam trains… so that seemed to be the more interesting option.

No doubt the steam train would have disappeared if it wasn’t for the Harry Potter movies. But as noticed a couple of times on this holiday: when a movie or series features a place, the tourists will flock to it. With regard to this train you have two options: you can be on it, or you can photograph it from the sidelines.

In most things in life it’s more fun to be on the actual thing. But in this case I think spectating from the sidelines is actually the better choice. 🙂 Besides, the train is so popular, you have to book well in advance. Snd then you get to be on a train with a gazillion kids who are all wishing they were Harry Potter and who regard you as muggles. So we decided to drive to Glenfinnan and actually watch the train.

We, and about 300 other people. When the train finally passes the flanks of the hills on either side of the viaduct are covered with people. Parking is a real challenge, so whatever you do, come early.

From the parking lot it’s still a 20 minute hike to the viewing spots. There are signs to these spots, but of course I thought I knew better: I thought if I walked on I would get to a better spot, away from the people. Not true of course. Eventually I ended up right where the signs would have directed me in the first place. Just took the most difficult route to get there. 🙂

Click to see the pictures larger on your screen.

We came an hour early, and already there were quite a few people. The number grew steadily. Of course everyone has a camera. I was worried people would come into my shot, but that wasn’t really a problem. I recommend you wear shoes that can get dirty, because chances are they will.

The surrounding landscape is lovely. You’re in the highlands. Could these hills be any more green? Could it be anymore peaceful?

The viaduct is impressive by itself. It sits there as an artifact of an industrial age now past. Somehow the viaduct and the surrounding landscape complement each other perfectly.

Everybody waits for the train, staring at the same point in the distance. There are a ton of kids, and for them this is all about Harry Potter. There was a cute English family with young kids next to us, and the three kids all held plastic magic wands. So cute. “When is the train coming, mommy?”

Well, you can’t miss it. The train appears exactly where you expect it, and it moves nice and slow. The curve of the viaduct probably means it can’t go very fast to begin with, but the driver knows there will be a ton of viewers, and so he goes extra slow. The train horn whistles in the middle of the viaduct. The whole experience is every bit as wonderful, and rustic, and nostalgic as you expect.

And it’s over in two minutes. You click your camera like crazy. I had just enough time to change my lens, because the train comes by fairly closely. In situations like this I have to tell myself not just to take photo’s, but also just to enjoy the experience, which is always challenging.

And just like that it’s over… the train disappears out of site, and everybody climbs down and walks back to their car. Or camper, or coach. By the way, I recommend the flapjack from the gift shop. Best flapjack I ever had!

Most people pile in their cars and drive back to where they came from, which presumably is Fort Williams. But I strongly recommend you follow the road to Millaig. It has absolutely stunning scenery!

The road runs mostly parallel to the train track. So if you time it right, you can still see the train a couple more times. The train dead-ends in Millaig, and then returns to Fort Williams. I got the following shot of her at Morar. Another viaduct, this time with a waterfall in the foreground. Could it be any more Scottish :-)? Only this time the locomotive is turned around as the train is heading back to Fort Williams. You have to be ready for it though, because you only get one chance to get this shot!

We returned last night from a fantastic three week vacation. We visited the Lake District, Scotland, the Isle of Skye and Cornwall! As I wrote before, I always bring my camera, especially if I am going to a beautiful place. That’s how I keep my passion alive: creating the images I want without a client bossing me around 🙂 ! Over the course of the next few days I intend to bring you the best images from each place.

The real destination for our holiday was Scotland, and then specifically the Isle of Skye. But because we wanted to finish our time in Cornwall with Sophie’s family, we crossed the channel from Dunkirk to Dover (this is the cheapest option to get to England), and then drove up. We broke up the trip with a four day visit to the Lake District.

I was not prepared for how beautiful the Lake District is. It is Majestic! I wish we could have stayed longer!

As always, you can click on the photo’s to see them larger!