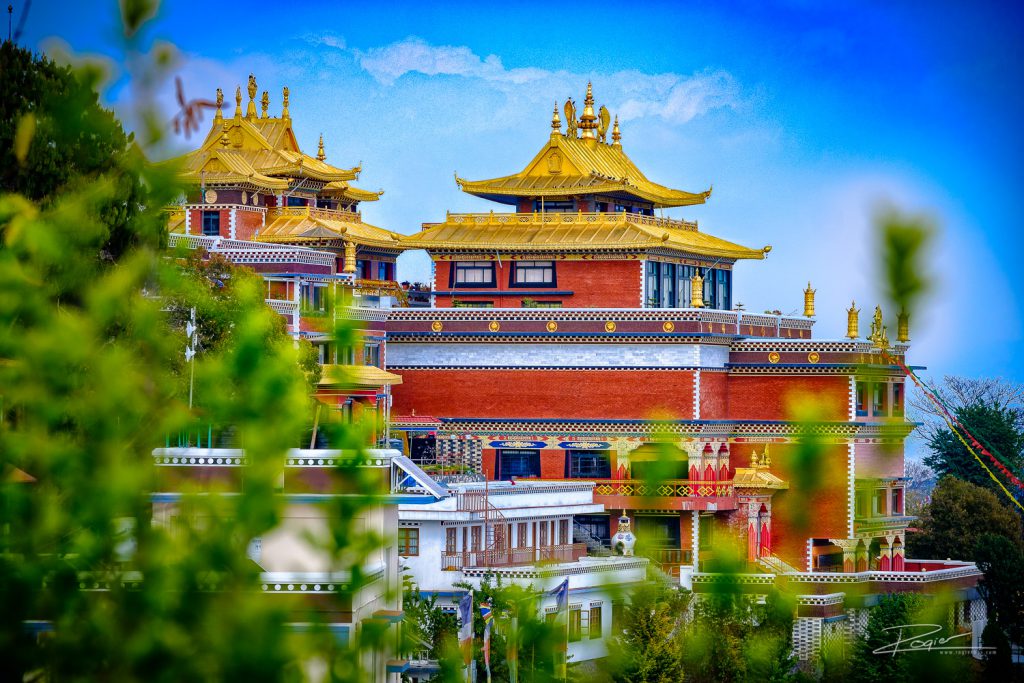 Apparently not many westerners are privileged to visit the Thrangu Tashi Yangtse Monastery monastery at Namobuddha. Presumably because it is one of the holiest places in Buddhism. We spent an afternoon looking around the monastery. Unfortunately, some of the most amazing places are not allowed to be photographed. Still, let me show you some of what we saw.

< Previous: day 3, people around Namobuddha | Next, The beautiful people of Bakhtapur >

Namobuddha sits on top of a hill. The golden roof can be seen from miles away, with long lines of colorful prayer flags leading up to it. The building is mostly red, with decorations in red, orange and yellow everywhere, finished with details of gold paint. The floors are mosly black and white marble, which in summer must be nice and cool, but for now was quite cold! The monks just wear slippers; I was glad with my mountain climbing shoes with thick socks. Until you go to the dinner hall, where you have to take them off. 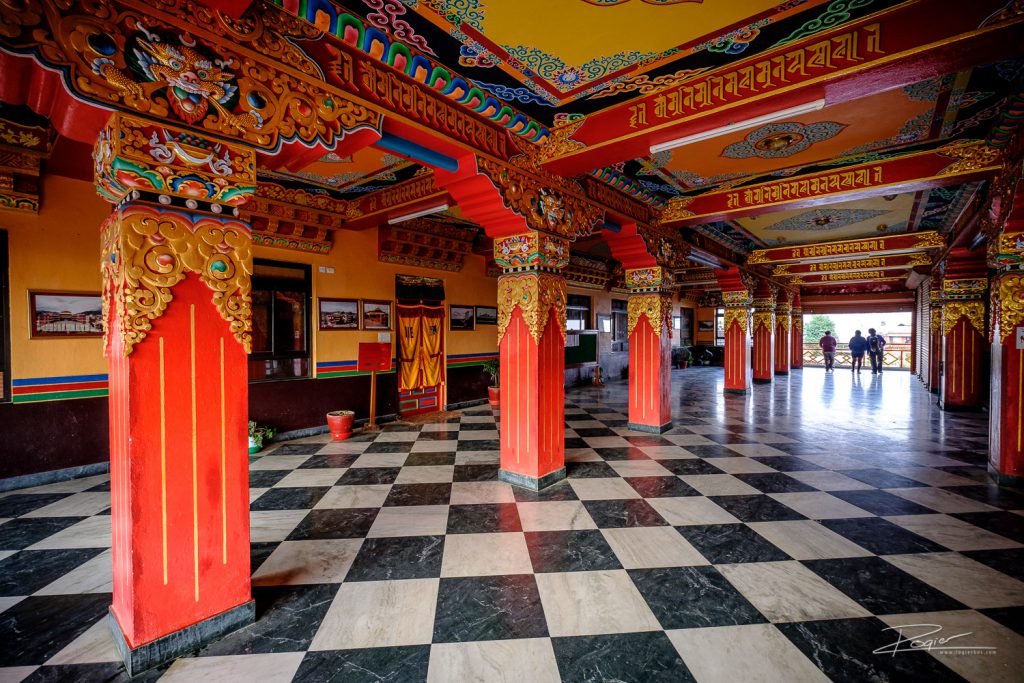 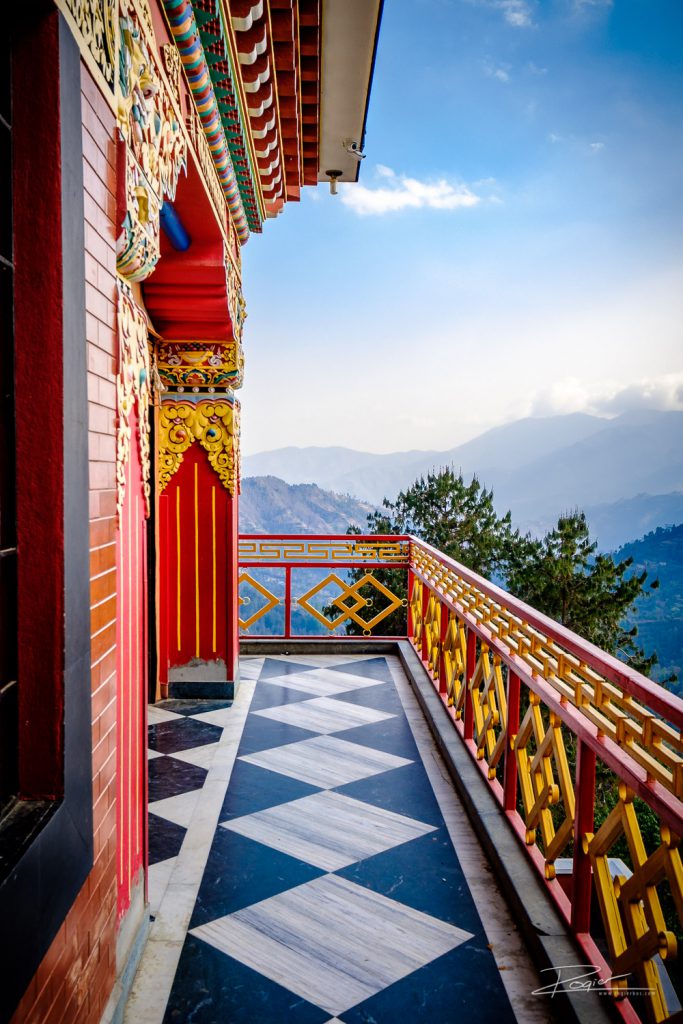 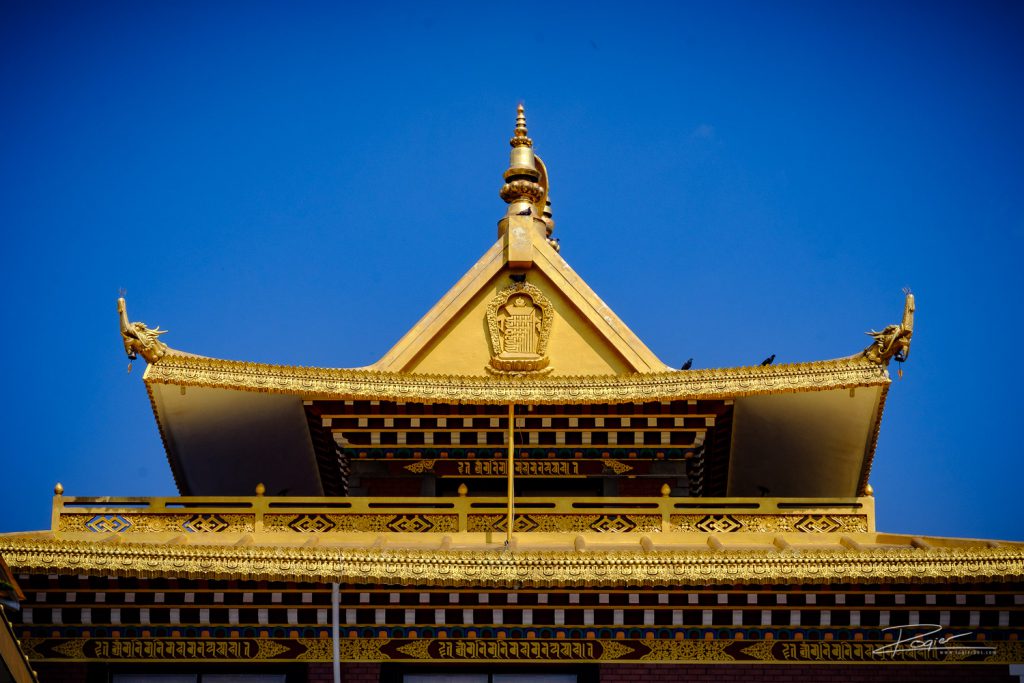 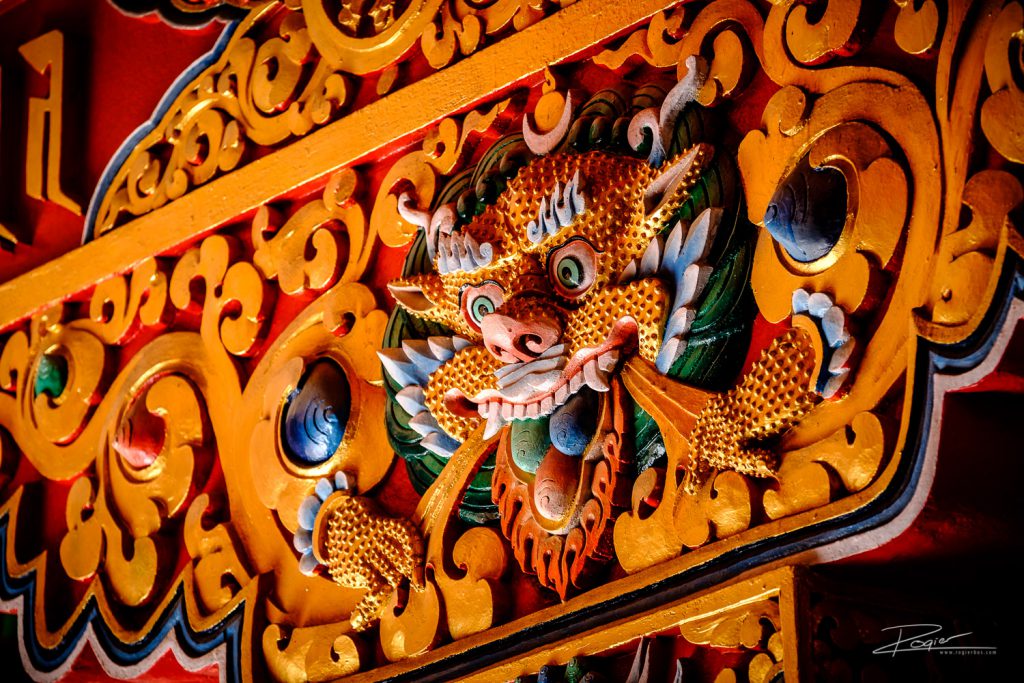 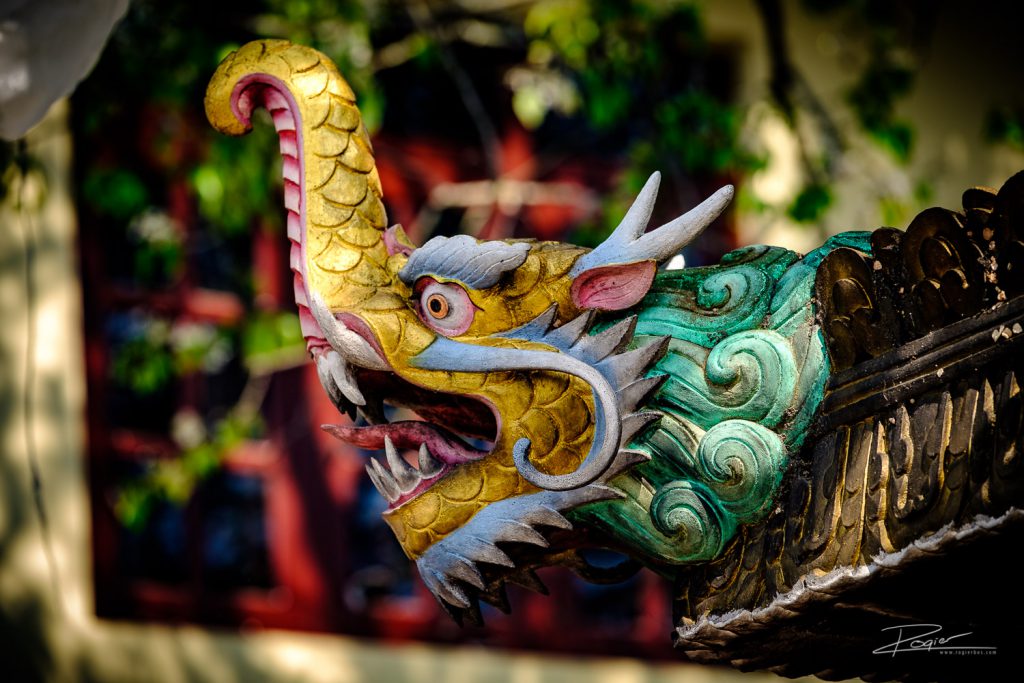 Buddhism as a religion

I am not sure I am qualified to tell you much about Buddhism as a religion. I asked a lot of questions of our different guides (some of the group members started laughing or rolling their eyes after a while), but it would seem my rational western analytical mind does not quite get the Buddhist way of thinking. Here are a few conclusions at which I arrived during my trip:

By the way, I started this paragraph by calling Buddhism a religion. You may not want to repeat that to loudly. Lots of people I met swear that Buddhism is not a religion, but rather a way of life. We had some interesting debate on that in the group. Here is my take on that.

Here are a few images on the subject of Buddhism. 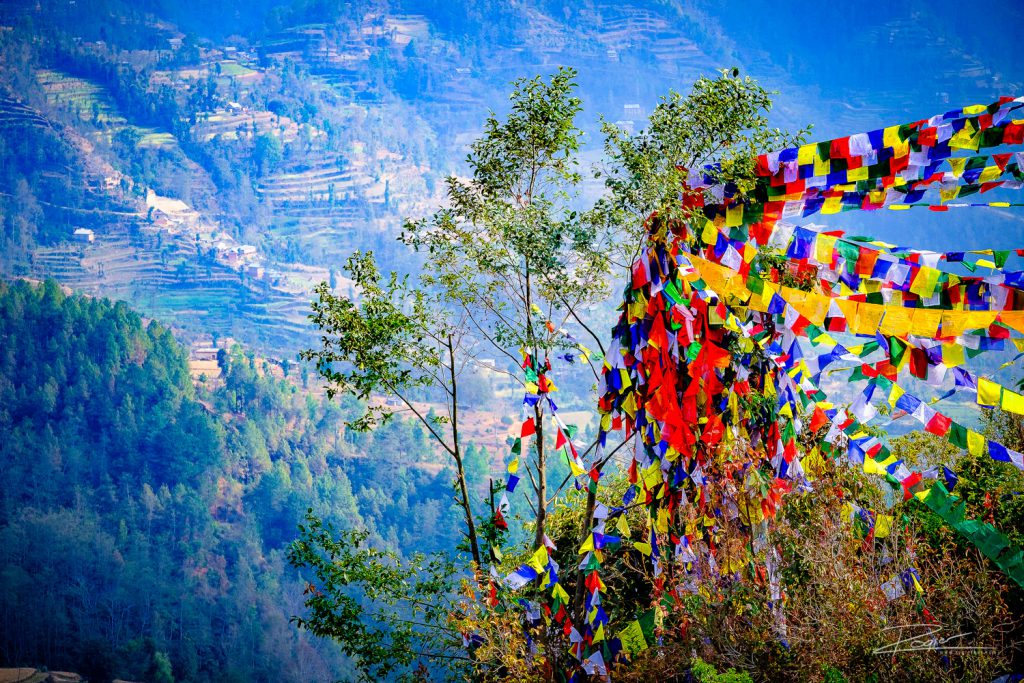 So what’s with the ‘prayer flags’? They are a common occurrence in this part of the world. You will see them strung for miles along hill tops. The idea is this: the flags have prayers printed on them. The wind blows through the flags and takes these prayers with it, to wherever prayers need to go. I think this is a creative prayer-delivery system. 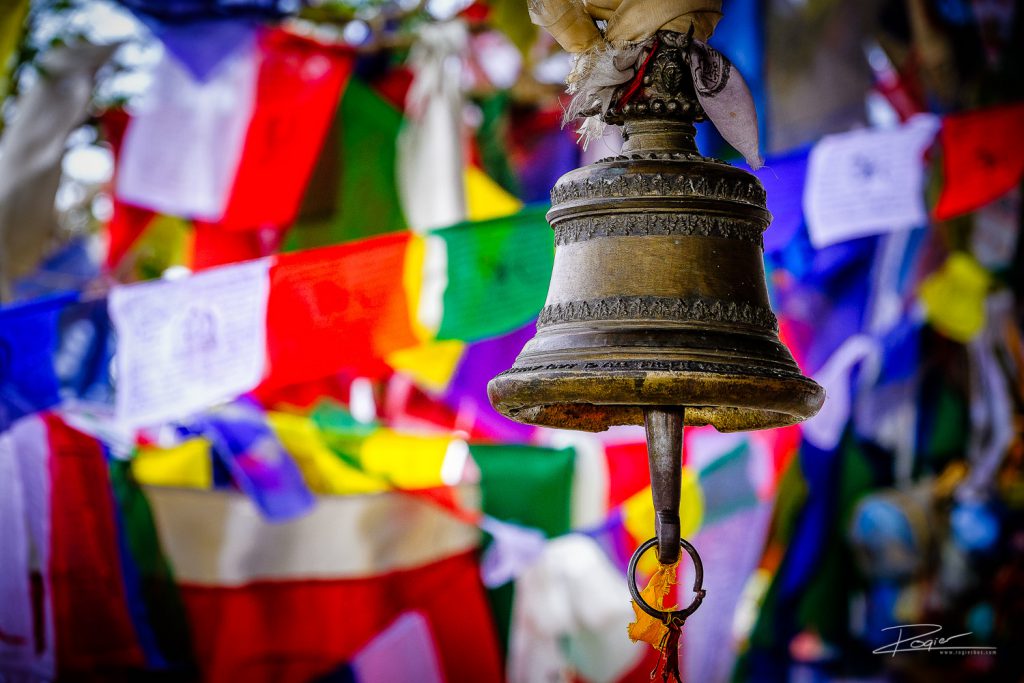 Similar with the bells. Nepal is a noisy country, with people in traffic tooting their horns constantly. Added to this cacophony is the ringing of bells. A Hindu visits his or her shrine every morning, offering something to the image of the deity inside: rice, flowers, money are things you often see. Upon departure the Hindu does two things. One, he or she takes a little bit of paint and puts it in the middle of the forehead. In my Nepal collection you can see this paint-blotch on lots of portraits. Two, he or she rings the bell, to let the god know they’ve been. 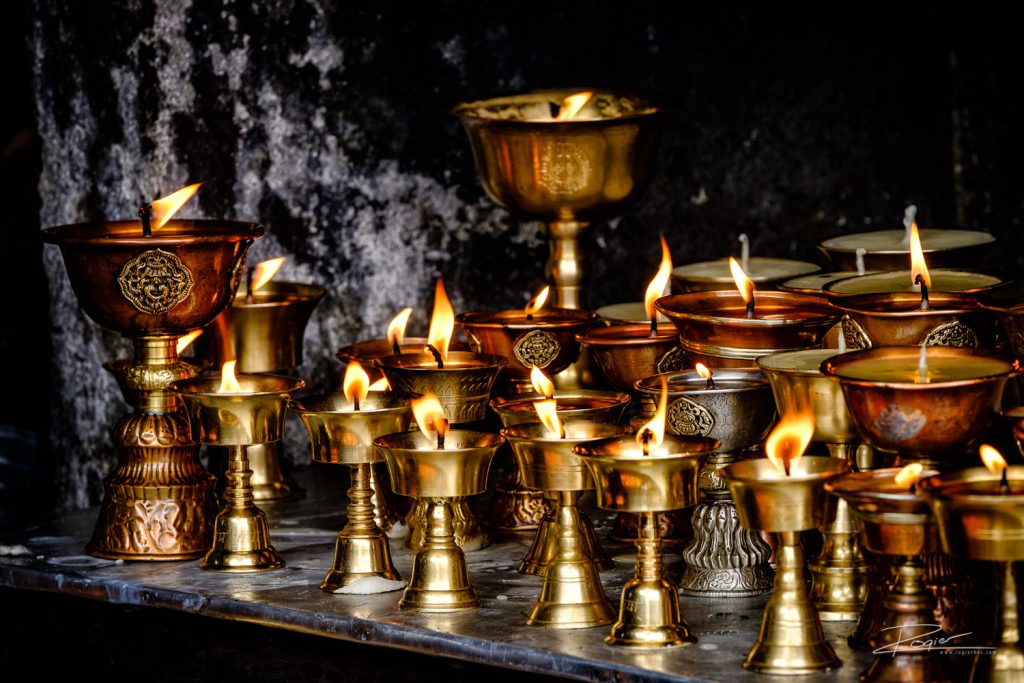 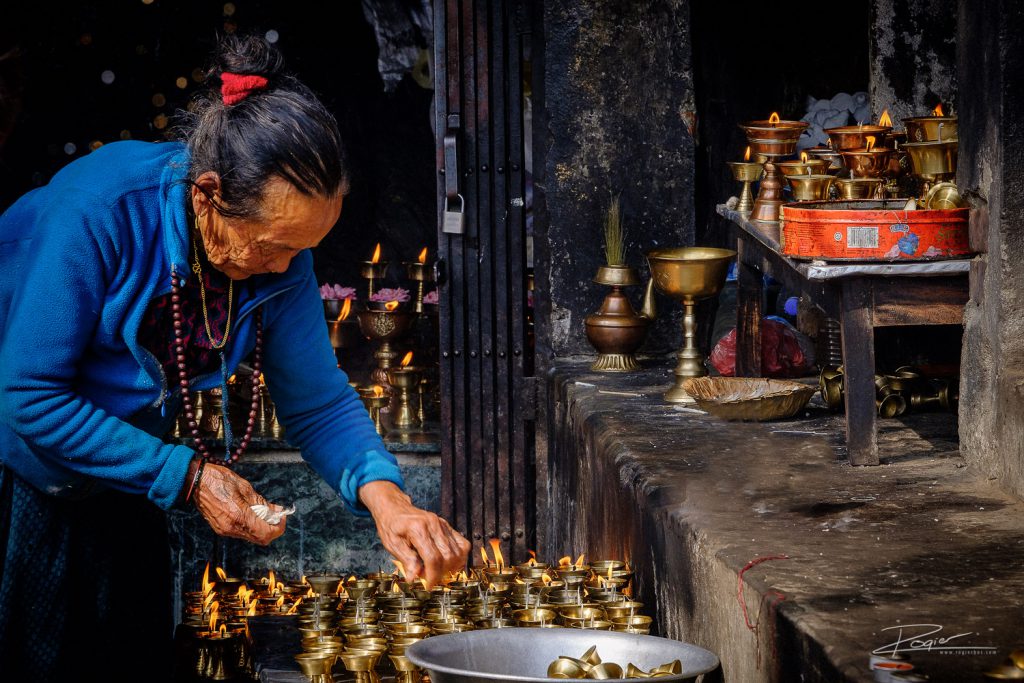 Prayer candles for ancestral worship at the shrine for the Buddha who gave his body to the hungry tiger. 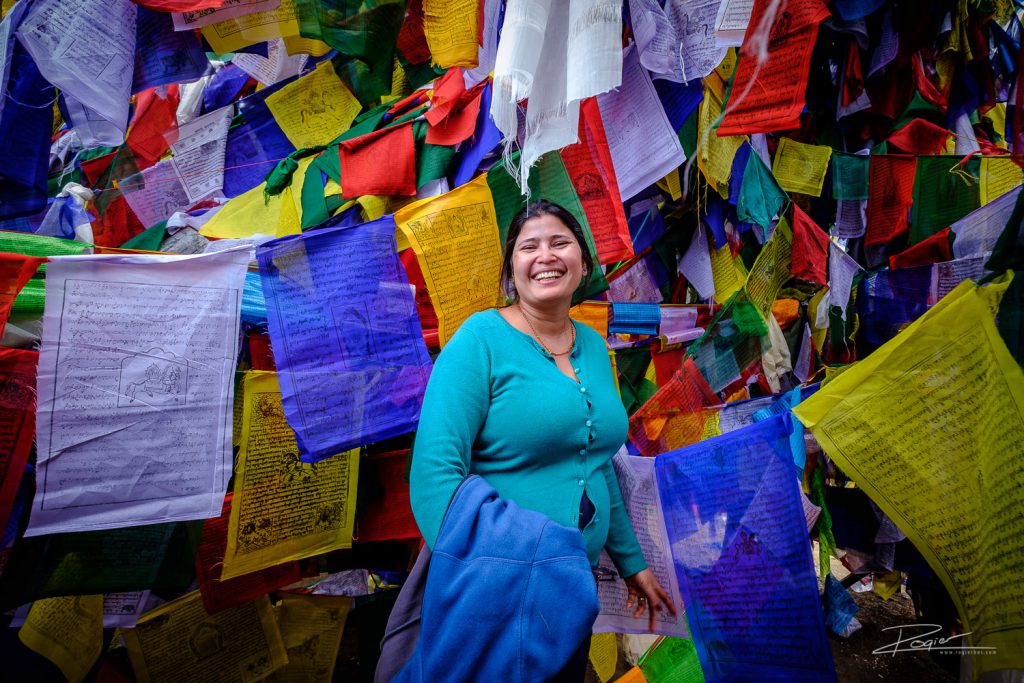 Our tour guide, Holi, between the prayerflags at Namo Buddha. 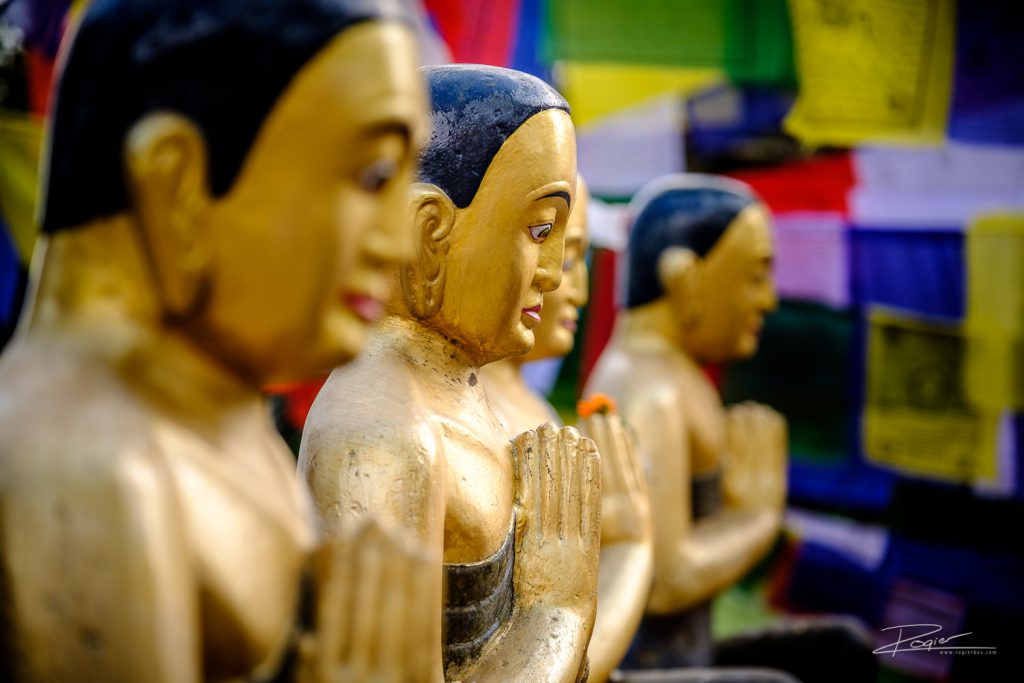 There are buddha images in all types and positions everywhere. In this picture I’ve sought to combine the statues with the prayer flags. How much buddhism can you get into one photo?

The monastery is a training school for young monks. Everywhere you look, you see these boys, dressed in red and yellow, with books, going from class to class.

Nepal has a cast system. Only the oldest son of Brahman families can enter the monastery. They do so at age 8. At age 18 they have to decide if they want to continue being a monk for the rest of their lives. A monk of course devotes his life to prayer, study and meditation. Yet these are also boys. So we saw them buy candy at the local shop, sneek a bag of crisps into the sanctuary, and play together in the marble halls. Late this afternoon we got to photograph a couple of them. Some of them were hesitant, but a number enjoyed the contact. Here are some of my favourite images. 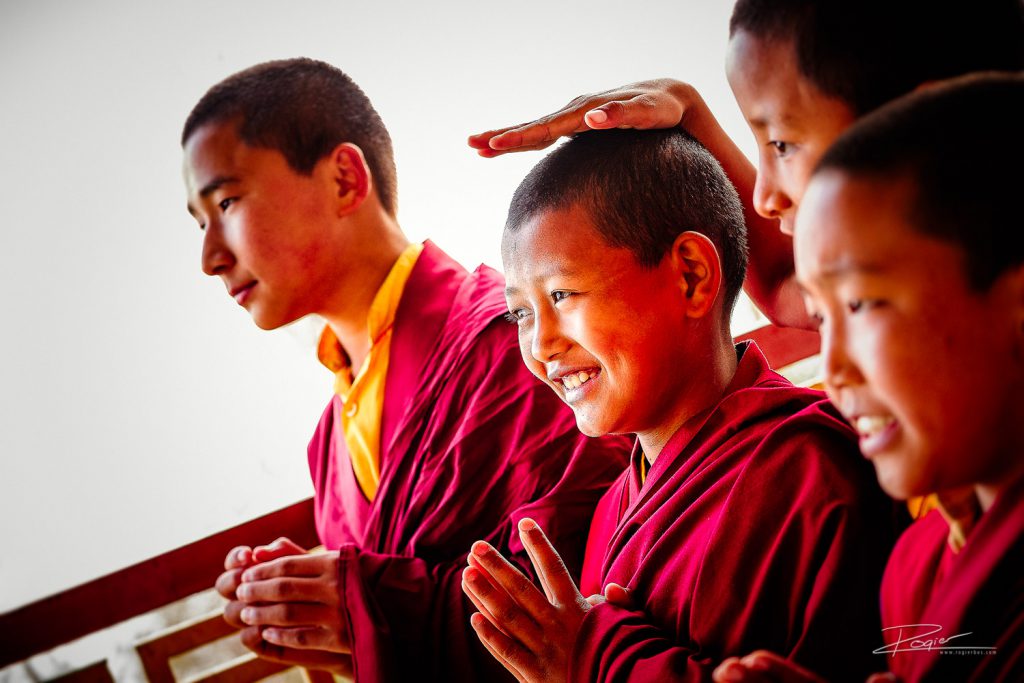 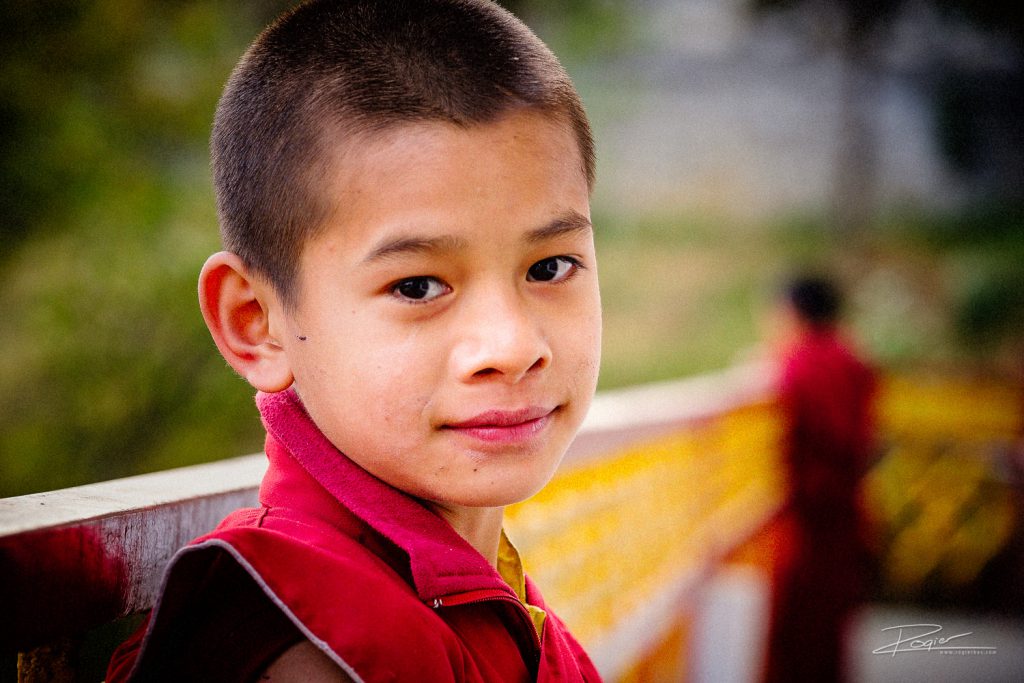 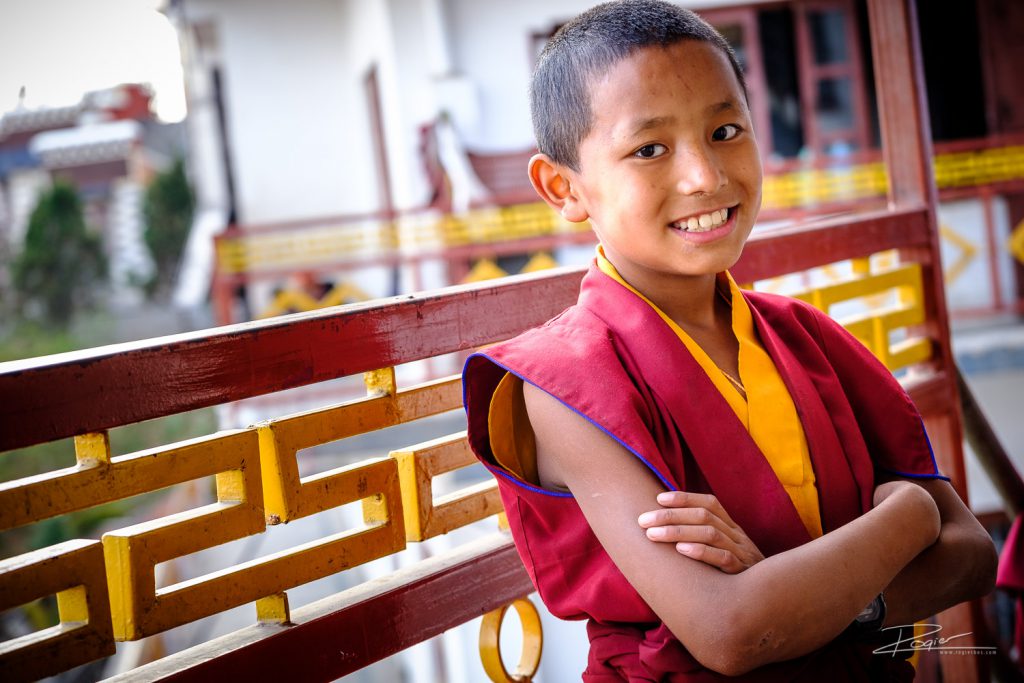 Heading for the Himalaya’s…

As the sun was setting you could really see the mountains. Not the Himalaya’s, but these are actually already serious mountains. I love the different mountain ridges you can see. In this picture I count ten! Of course, that’s quite exciting for this Dutch boy! 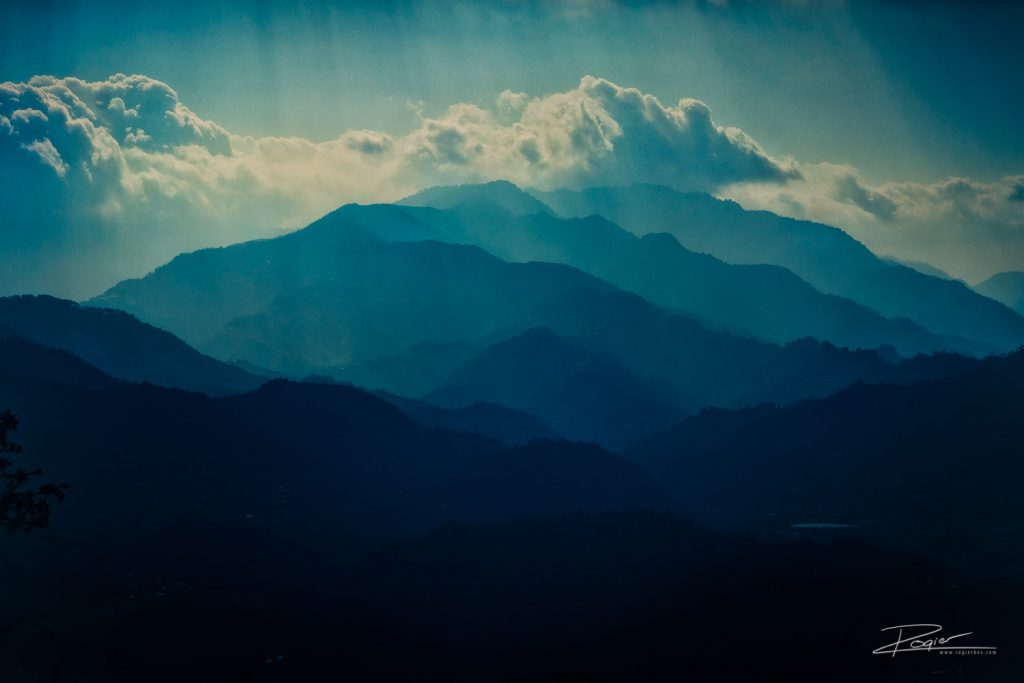