So you have a studio. You have lights. You have background paper. You may even have a pretty model at your disposal… but after a while you start noticing all your pictures are shot against blank backgrounds. You need something there. That’s where the lightblaster comes in: it projects images on the background behind your models. Time for a product review.

It is a well known problem: what do you put in the background? There are various options. You can collect ‘stuff’: couches, lights, chairs, toys, furniture. But every picture has different needs. You will quickly clutter up your studio with stuff that you will only use every now and then.

You can invest in backdrop screens (expensive), or wallpaper backgrounds (labour intensive). I even invested in some Lastolite backgrounds. They are fun and flexible — and expensive.

So I recently ordered the Lightblaster. The lightblaster allows you to project images on a background using speedlights and studio flash. You use a regular Canon or Nikon lens, with 35mm slides. You can use your old slides or make new ones or order a set of pre-designed slides.

I was presently surprised to see this product actually comes from Israel. Nice to see that not all innovation comes from the US or Japan! Last night I put the Lightblaster to the test in my studio. Since I did not have a pretty model at my disposal I thought I’d use the polar opposite of that: my own face. I was recently told I need a new profile picture for Facebook and Twitter anyway…

Setup of the Lightblaster is straightforward and easy enough. There is a manual, but you won’t need it. My order came in an alarming amount of small boxes, but you quicky figure out what is what.

The lightblaster was aimed at a black background. I had a large Octa (1,70cm) set up with an Elinchrom studiolight (300Ws) set up exposing the model (or rather, substitute model: me). The Octa and model were about 3 meters away from the backdrop. I had to set the Nikon Speedlight to full power to have an acceptable image on the background. Meanwhile the studio strobe was at the lowest setting, and the camera (Nikon D800 with 24-70mm/f2.8) was set to ISO 100, 1/160s and f2.8. I triggered the camera with a remote controller.

Time to move the lightblaster to the studio flash therefore. I mounted the lightblaster on the contraption that fits it on a standard reflector. All fairly straightforward, but then you have to put the softcover hood over the lightblaster to control the lightspill. I have to say: this is less then wonderful. Not only does this cover the lightblaster up so that only the lens sticks out and is it impossible to change slides, but the hood does not close well at the back meaning a lot of light spills backwards, straight at my camera.

And what surprised me most of all: my Elinchrom 1200Ws, set to full power, did not yield more light out of the lightblaster than my Nikon SB800 Speedlight! True, you can now use the modelling light to focus the image coming from the Lightblaster, but I still cannot turn my camera to a higher aperature, like f5.6!

And then, all of a sudden, my 50mm lens dropped to the floor. Turns out the lightblaster does not allow the lens to click into place and and fix it there. In the process of putting the lightblaster on the reflector and putting the hood over it the lens had turned loose. Luckily my lens was ok — but this is a serious design error in my view.

A note about the slides. I ordered two extra sets, giving me a total of 60 slides or so. I think there are 6 that I will use, and 40 for which I have absolutely no use. I am not the kind of photographer who likes to put angelic wings on models. But then, you’re always going to have that: some options will appeal more to some than others. What is more interesting is the option to print your own slides, and I look forwards to getting into that. One additional note on this: I had thought that some of the cooler designs, which you can find on the lightblaster site, would be in the sets I ordered, but they don’t seem to be there?

All in all this is a rather mixed review. Yes, the lightblaster is a great concept and it has real potential. And yes, I was able to create some fun images that I can use on social media. But there are enough issues that give me real pause:

Here are the images I shot of myself. Again, not the best or most attractive model. Image 2 might be how some of my clients see me :-). Image 5 I like to call, Rogier the Astronaut (my wife says: in your dreams). And image 8 makes me feel like the villain in a new James Bond movie. 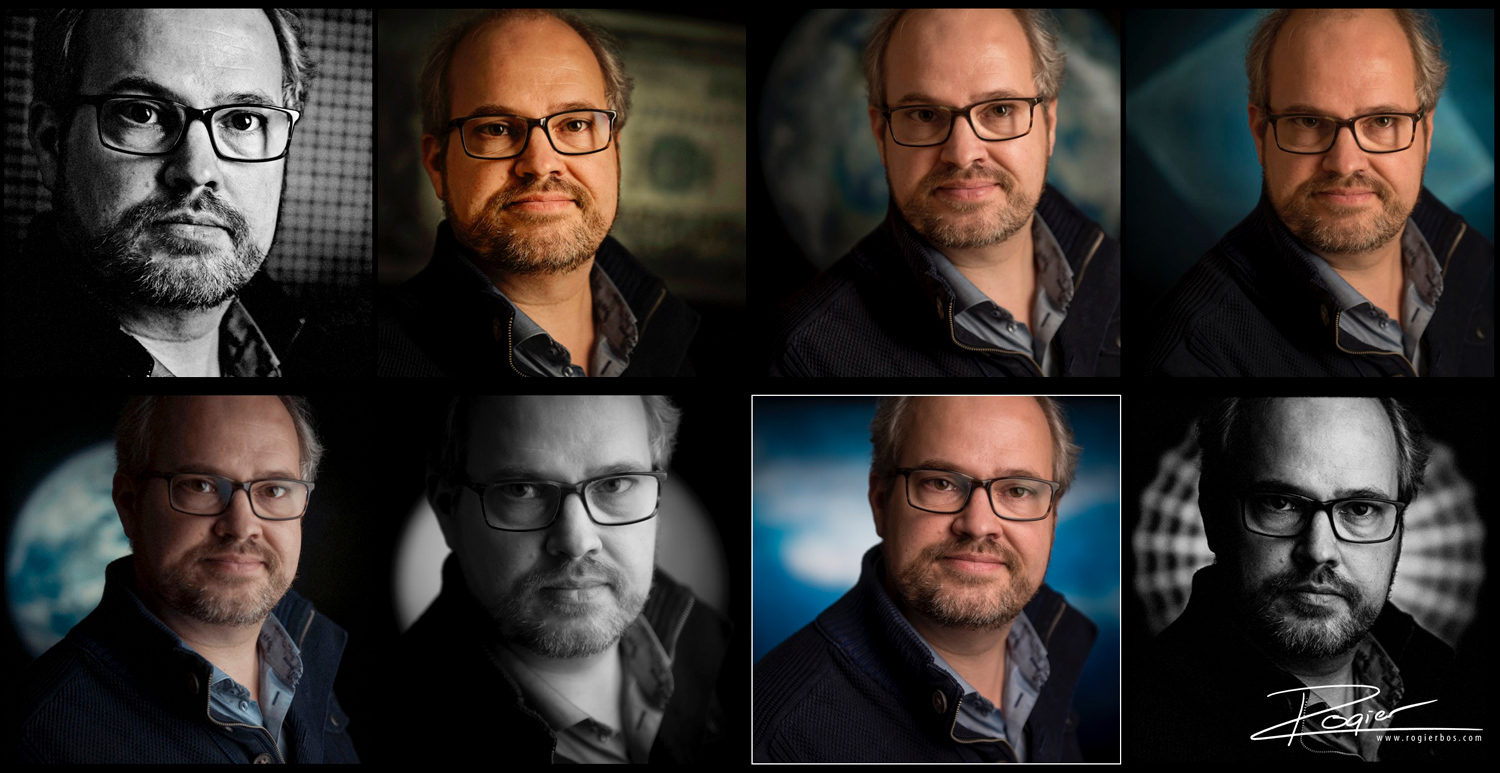